Ian Mitchell -  on a brilliant three week visit to Gariep Dam, in the Free State Province of South Africa, to fly Steve's (from Dunkeswell) Ventus M. 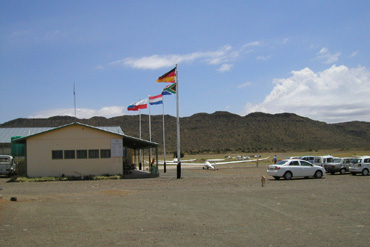 Finally made it to Gariep Dam, first day at airfield today, very hot 29C. Had a chat  with camp instructor and a site check was arranged. You will not believe this, but we took off at 1400hrs in a Nimbus4 and climbed to 16000ft which was still  some way below cloudbase, we then set off on a  sightseeing tour  over vast  areas of totally unlandable terrain but spectacular scenery, we landed some 5hrs  later after flying a total of 508km which included a 100km final glide, it is  hard to contemplate just how good conditions can get as nobody thought today was  a particularly good day but it was one hell of a site check. 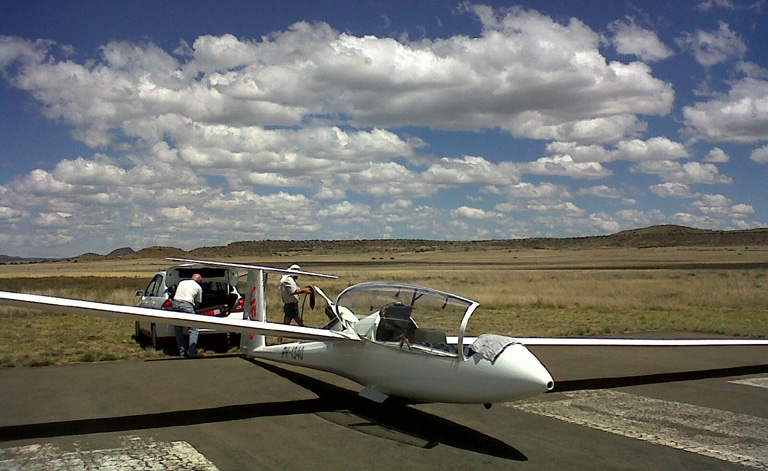 After the excitement of my site check it was time to prepare things for the next few weeks. One thing that needed to be sorted was a temporary tow bar for my hire car (a VW polo) as everyone was expected to be able to look after themselves around the airfield. It transpired that there was a chap in the village who had made and fitted many tow bars for pilots before. A visit was made and measurements taken, the following day the tow bar was fitted, and at a cost of R200 (£17.00) it was a real bargain.

Gliding at Gariep Dam only takes place from the beginning of November until the end of January each year as it has been done for more ten years or more. There were around 35 pilots from all around the world at the site with some staying for the full 3 month duration of the camp. 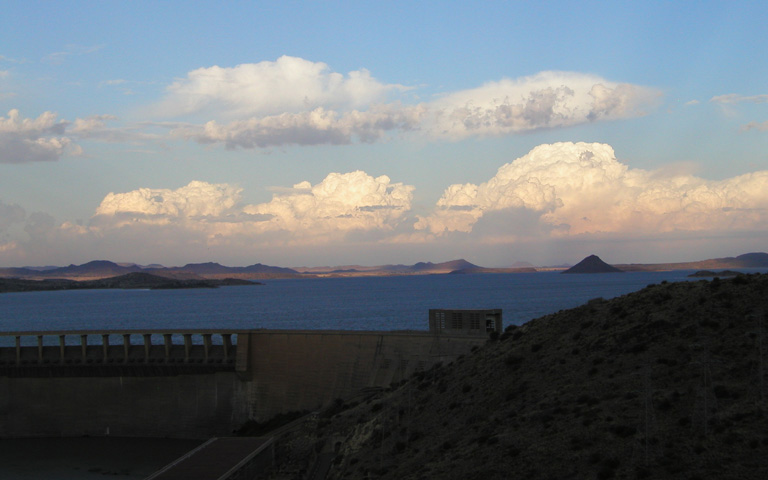 With everything ready I was now very keen to have my first solo adventure in the Ventus 2CM but with gales and thunderstorms forecast for midday a trip to Bethulie was planned. It's amazing to see the varied living conditions and styles over here.

The following day dawned without a cloud in the sky, very hot but with a fresh wind across the tarmac runway. Having done less than ten self-launches I was a bit concerned about the crosswind. In fact I had to abandon the first attempt at takeoff as I let the tail rise too soon and had insufficient rudder authority to keep straight. Fortunately I aborted in good time and managed to stop before running off the runway into the gorse (bit embarrassing though as I was pushed back to the threshold). Lesson learned - the second attempt went without problems.

The climb under power was very slow as the glider was full of fuel and water ballast but my first thermal was soon found, the engine was then shut down and retracted and we climbed away with a 3kt average. As I passed 7000ft this increased to 5kts and topped out at 12000ft. The next 6hrs were spent exploring locally, practicing soaring in the blue and generally having a great time soaring over this vast, barren, uninhabited landscape. 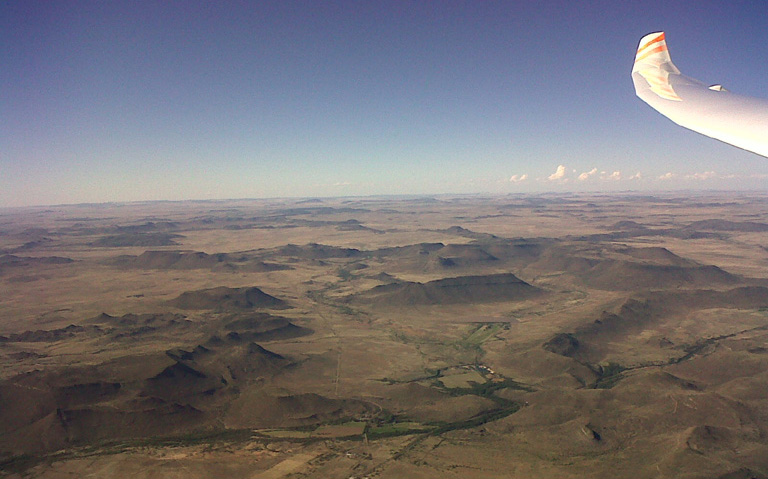 The next few days saw temperatures soaring to 35degrees and not a cloud in the sky. Treading very carefully I flew a 200km task, then a 250km, followed by a 320km triangle, staying in gliding range of the airfield at all times. On the 320km task I did not get below 1500ft above glide to Gariep, most of the flight was spent between 11000 & 14000ft on oxygen.

Then we had a few days of terrific thunderstorms with incredible lightening bolts. Definitely not flying days, but conditions looked promising after this had past.

At briefing today everyone seemed optimistic that great distances could be covered and I should try a 500km. So a local 500km task was programmed into the Cambridge & Oudie (Gariep/Edenburg/Verborgenfontein/Gariep) - a total of 525km. The first leg covered 100km but had the Bloemfontain TMA FL105 just above the first turnpoint so I had to descend to 10500ft around 10km before Edenburg then dash in, round the TP and back out, before being able to climb again. All went well at the TP and I was soon climbing again back up to 14000ft, just over 1hr had past since I launched at 9.30hr.

The next leg was the longest at 245km. Conditions were great with very strong lift, but you need to be aware and stop climbing at least 1000ft below cloud base as you could so easily be sucked up inside. Even at max speed with full airbrake you can be climbing at over 4kts under these massive cumulus clouds. With about 100km to go before the second turn point I had to fly around a light shower falling from a rather large dark cloud. Although an inconvenience I thought nothing more about this and raced off towards the turn point.

As I approached Verborgenfontein (a small airfield) and my second and final turnpoint I could see yet another shower, this one appeared a little bigger. It looked a possibility that I may be able to get around this shower and round the turnpiont.

With just 15km to run things got very black, the shower was growing in size, my wings were getting a bit wet and then to top it all - fork lightning. 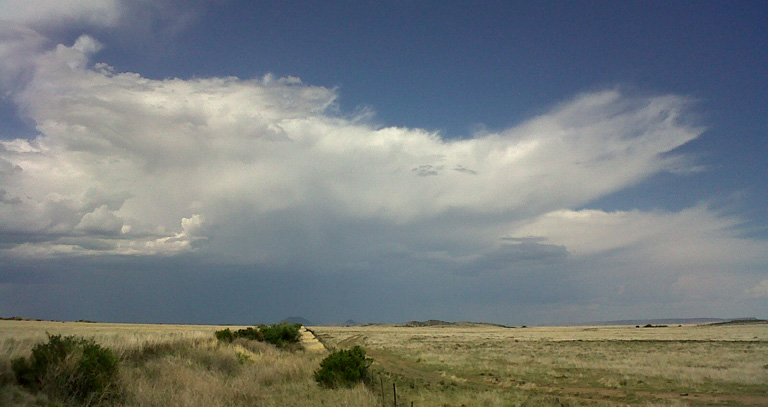 This was my cue to bin the task and race for home which was still some 165km away. The journey back to base was very exciting as it seemed impossible to get away from the rapidly growing storm clouds. Conditions back at Gariep were still good but the winds were increasing, with a 30kt tailwind the 165km leg home was flown in 50mins. Not the result I hoped for, but 480km in just under 5hrs is not too bad.

I found the experience of flying in Africa fantastic with exceptional soaring conditions, stunning scenery and incredibly high cloud bases. But the unforgiving terrain made the thought of outlandings something to be avoided if at all possible.

Great flying, a total of nearly 40hrs and 1800km under my belt - not bad for December. 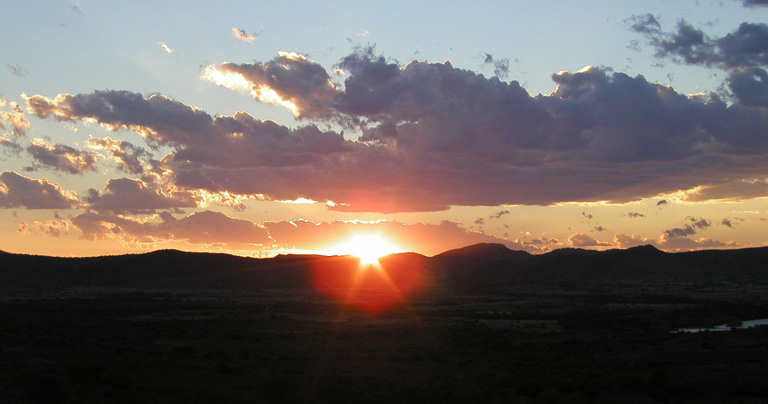